You’ve got a great idea for an app. Now you want to get it built. But how much will it cost, and can you afford it? The answer to this question is important because it determines what steps you need to take next.

For example, are you able to self-finance the development of your app? Or should you look for alternative sources of money to pay for its development such as an angel investor, finding a business partner with deeper pockets, joining an accelerator program, or starting a friends and family funding round?

This blog post will help you find out how much it will cost you to develop your app while staying true to your vision. If you want to make progress on your app development project, read on.

How much does it cost to develop an app? The simple answer.

There’s truth to the notion that a simple answer to a complex problem is necessarily an oversimplification. But sometimes a simplification is close enough to the truth to be useful.

With that in mind, here’s our simple answer to a difficult question; how much does it cost to make an app? 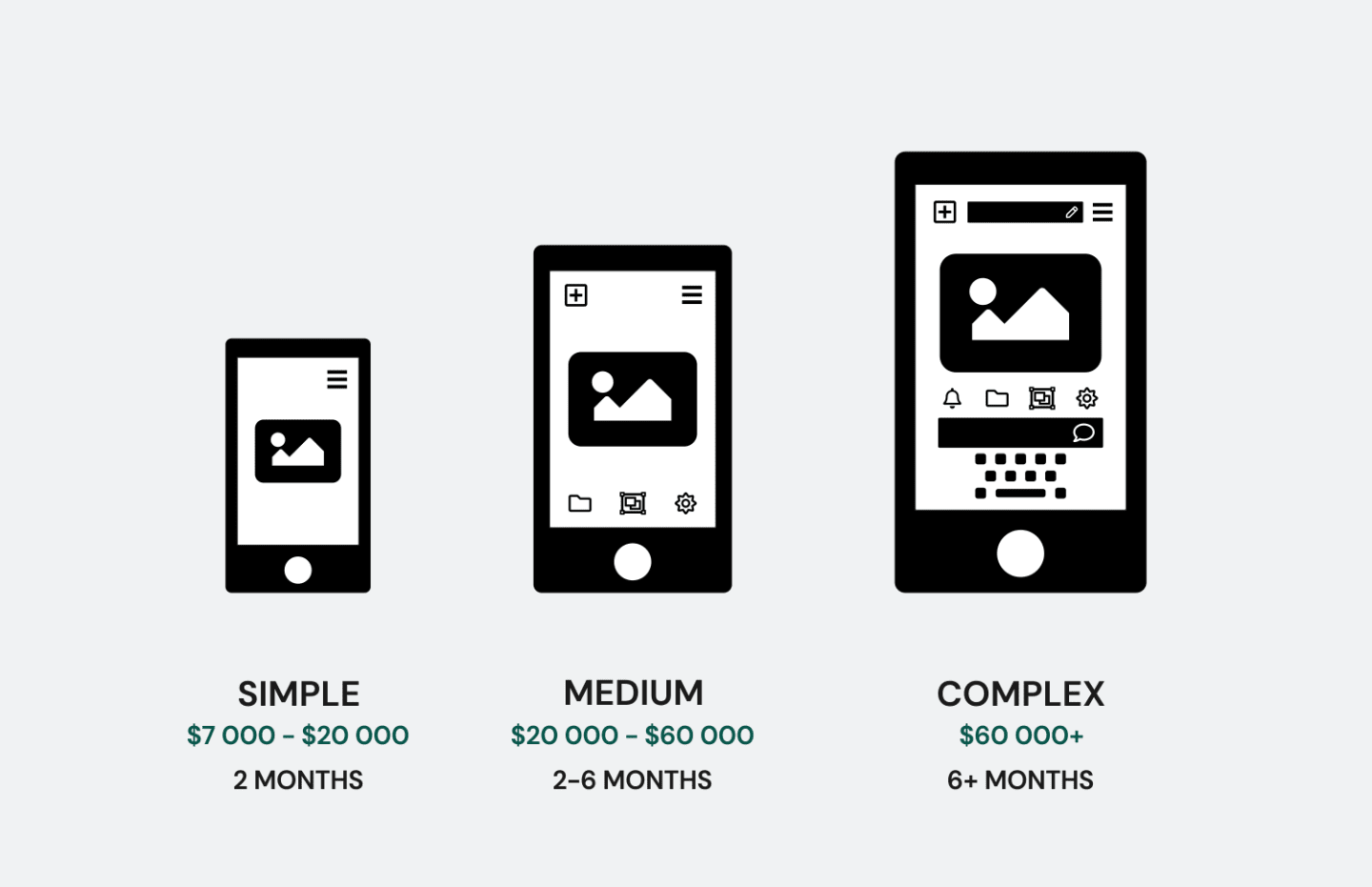 This is painting with a very braod brush. Don't stop here - read on to find out how to understand the factors behind your own app's development cost.

Keep in mind, this is highly approximate and the precise cost will differ depending on many factors.

One of the most significant is the particular market you’re operating in. An app with a medium-level of complexity may cost far less to develop in a developing country than one where labour costs for software engineers are considerable.

How much does it cost to build an app? A breakdown.

According to a survey by Clutch, an industry-leading directory that helps entrepreneurs find the right digital product development agency for their needs, the median cost of developing an app is between $37,913 and $171,450. That’s quite a range.

The cost of developing an app will vary depending on what kind of app you want to build. Some early questions you can ask to help gauge the potential cost of your project include:

For the more complex projects, development expenses could rise above $500,000.

But if you’re on a smaller budget, there’s no need to panic. By breaking down the overall cost into a series of discreet spending areas, it’s possible to identify:

a) Why a project costs as much as it does, and b) Where savings can be made. 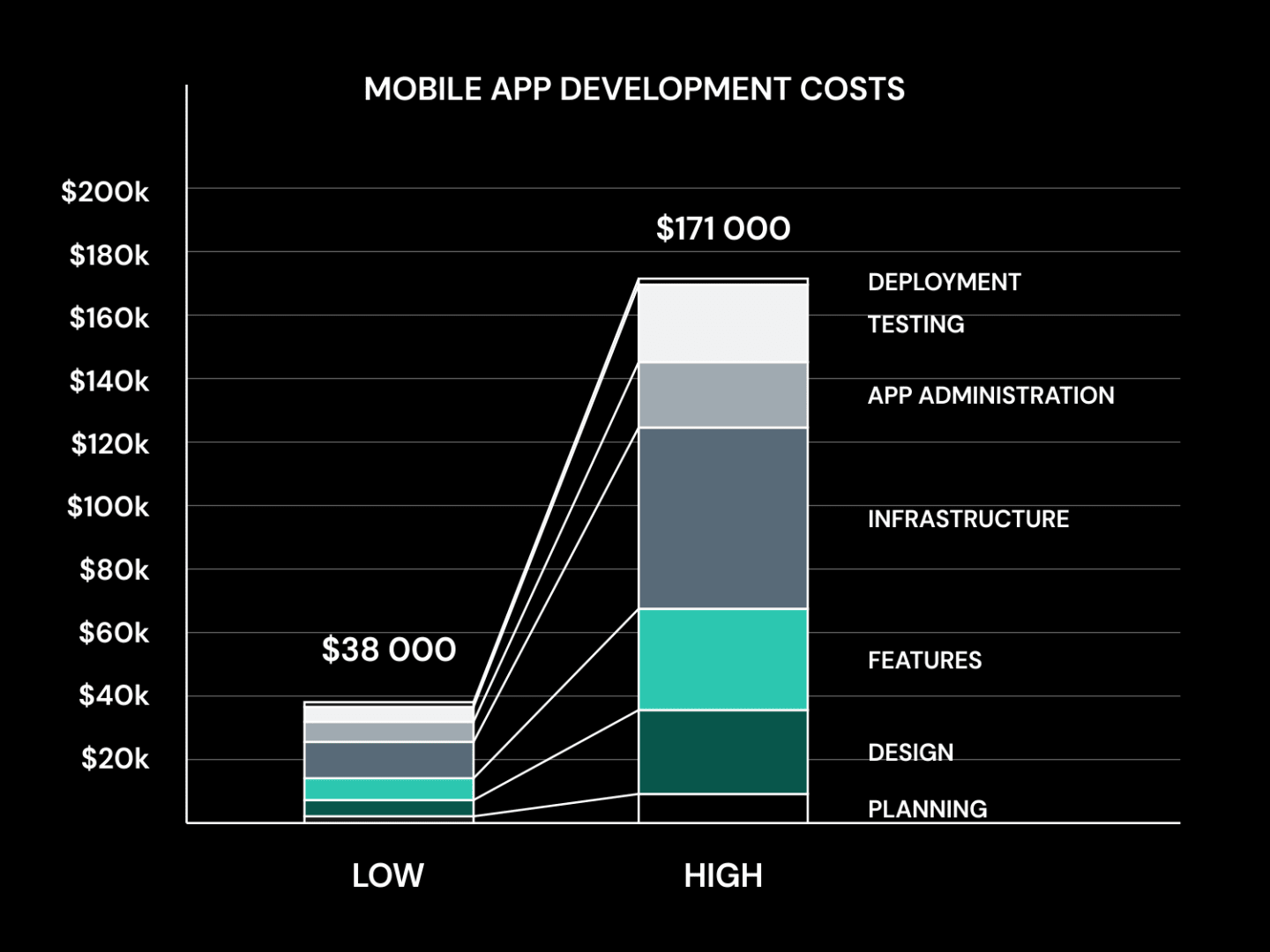 This data is based upon interviews conducted by Clutch with representatives from 15+ mobile application development companies. These companies may not be reflective of the industry internationally as a whole.

It should be noted that these figures tend to represent the condition of the market in North America and Western Europe. It is increasingly possible to secure high-quality developers located elsewhere.

These may charge rates lower than is typical for a classic Silicon Valley development project - potentially meaningfully less than $150 per hour, or even $100. Does lower cost mean lower quality? It can, but this isn’t always the case. Look at a development agency’s previous work to gauge the quality of their output, not their price tag.

For Develocraft’s most up-to-date estimates, it’s best to contact us directly so we can discuss your specific needs and provide you with more accurate cost projections.

One way to use this information is to consider where your own application would sit in relation to each of these categories:

For example, consider ‘features’. You may be able to distinguish between core features that are essential for your digital product to provide value to users and those that are nice-to-have extras.

Does your marketplace app really need augmented reality features? Probably not. Does it even need push notifications at launch? Not necessarily, although it might increase user engagement and be useful to have them.

Get estimates from different developers based upon not only your vision for your full-feature, blockbuster application and the MVP (minimal viable product) versions, but a range of options between the two.

Likewise, fully-custom, high-end design work is liable to be more expensive than a simpler solution based upon minor changes to existing templates.

Digital product agencies will be happy to hear from you and most will engage in discussions about the cost of development based on your various features without obligation. If you’re not a great fit for the particular agency, they’re likely to offer you advice about your next steps.

How complex is the app?

A more complex app will be more expensive, as we’ve seen. But what’s the difference between a complex and a simple digital product?

To determine how complex your app is, consider the following points:

This list may seem a little intimidating, but remember you don’t need to know all the answers right now. If you don’t, think of this as an opportunity.

The above questions are useful prompts you can use to start thinking about your app in more detail, discuss requirements with your team, and move the project forward by achieving greater clarity about what you need to build and, in turn, what it’s likely to cost.

Again, feel free to contact us to discuss your specific questions. Reading a blog post is a good step, to get an overview of this subject matter.

However, talking to experts who’ve worked on multiple types of development projects can really help you understand the specifics of your own project.

The difference between native and hybrid apps: more than cost

It’s generally agreed that, all else being equal, hybrid applications are cheaper tha. But does that mean that those trying to keep their costs down should always opt for hybrid?

What should really be driving this decision is what you want to achieve with your app.

Let’s take a look at the definitions of hybrid and native applications before diving deeper into the differences between them you need to know.

What is a native application?

Building a mobile app? A native application may be the choice for you. Native applications are built with specific mobile operating systems in mind, which means the code won’t necessarily carry over to another type of mobile device.

But what does this look like in the real world?

You might build a native app by Objective-C or Swift for iOS. If you’re going after users who lean heavily towards iPhones or the various iPads over Android devices, this could be a winning choice.

On the other hand, if you know from user research - not guesswork or hope - that your target demographic are much more likely to be carrying around an Android device in their pockets, Java could form the bedrock for your app.

But why go native at all?

Why build a native app?

The advantages you get with a native application include:

But perhaps you’re not one to go all-in on a single OS/device type. If you’ve got a broader target market in mind, perhaps it’s time to consider building a hybrid app. After all, it can be cheaper.

And aren’t questions about cost what brought you here?

What is a hybrid application?

A hybrid application is the established choice of those startups and tech entrepreneurs who shrink from the idea of putting all their eggs in one digital basket.

Or, arguably, the more budgetarily restricted.

But don’t think for one moment that hybrid applications are the cheap and cheerful option compared to the ‘premium’ native choice.

Far from it. Many very successful, high quality applications have been built as hybrid apps. Want some examples?

How about a plucky little startup called Twitter. Oh yeah, and Instagram. Even the Apple Store and iBooks are hybrid. Pretty crazy, right?

Now we’ve dealt with the potential stigma, let’s move onto the definition before hitting the strengths hybrid apps bring to the table.

A hybrid application is the trojan horse of the app world. Why? Because it’s a website packaged as an application.

The navigational elements are comparable to those you’d find in a native application, but that’s where the resemblance ends. Hybrid apps are effectively powered the same way as a website.

They’re HTML5 and JavaScript packed to resemble native apps. While a native application brings most of the content with it during download, a hybrid app loads the information needed from the internet as the user moves from page to page.

Why build a hybrid application?

Advantages of hybrid applications include:

You now have the tools to start working out how much your app will cost to build. Remember that this can be a difficult process with unforeseen challenges and costs, so finding the right digital product agency to work with on your app development journey is important.

We hope you found this information helpful. Preparing accessible guides like this takes us time and effort. If you did find it valuable in any way, why not let us know by sharing this article?